May is here revealing Mount Shasta at her loveliest – fully dressed in a gown of winter snow and lit up by the golden hue of sunlight.  But for her closest neighbor, the dusky conical pyramid known as Black Butte, the visual contrast couldn’t be starker.  Located directly adjacent to I-5 at milepost 742 between the city of Mount Shasta and Weed, California, Black Butte is what’s called a plug dome volcano, meaning that it started out as a large crater at the base of Mount Shasta, and then got formed by thick magma that kept pushing upwards and overflowing during multiple eruptions. Each successive eruption covered the previous one, the heating and cooling process fracturing the exposed lava, which is why some people think it’s more like a giant pile of gravel.  But if you get near the summit, you can see remnants of the cone’s solid core. 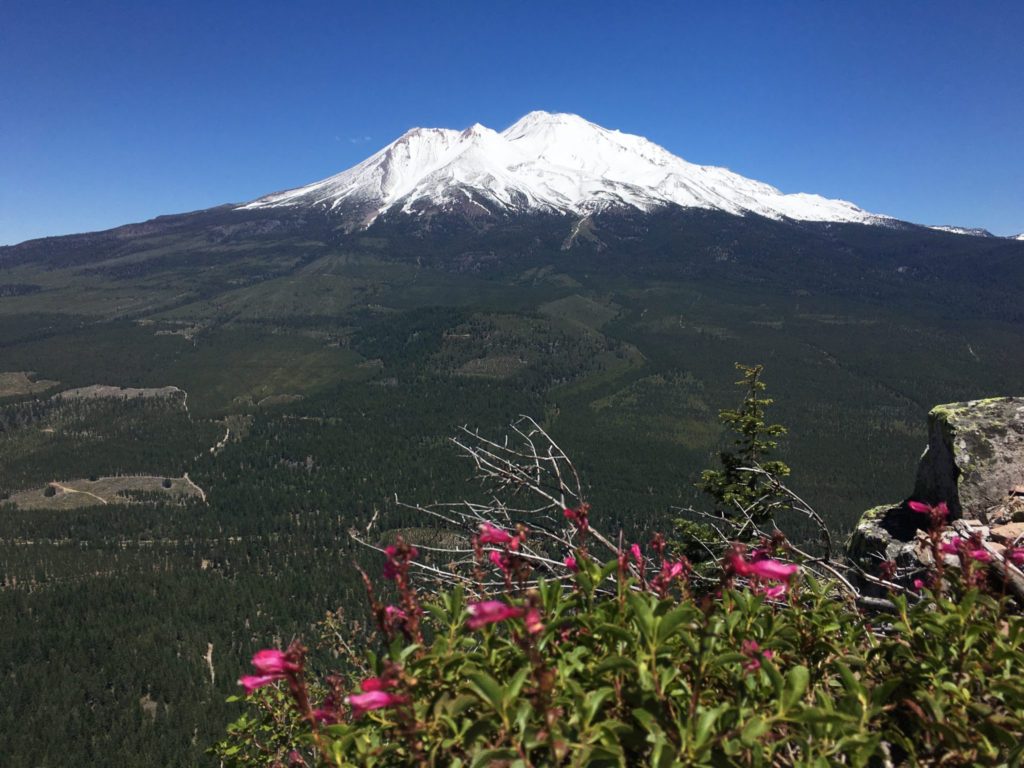 Black Butte’s black appearance is a dead giveaway to its volcanic origin – the rock being andesite, the same dense volcanic stuff that forms most of Mount Shasta.   It’s also the reason it got its name, even though once upon a time it was more romantically referred to by other names such as Wintoon Butte and Cone Mountain.  Even John Muir threw his hat in the ring and called it Muir’s peak, after spending so much time in this neck of the woods. But it would be wrong to dismiss Black Butte as Mount Shasta’s ugly little cousin. This often-overlooked volcanic vent is a unique and worthy day trip unto itself.  In fact, we like it so much it’s been ranked as one of Siskiyou’s most spectacular summit experiences.  And the best thing is, it’s hiding in plain sight so you might even have the trail to yourself.  To reach Black Butte, the best way to access it is from the Central Mount Shasta Exit on Lake Street, with directions here. Just a heads up that signs can sometimes be a little iffy.

The original trail to Black Butte’s summit was constructed as a means to get pack animals up to a fire lookout that was built there by the Civilian Conservation Corps in the early 1930’s.  The first lookout was destroyed by a storm in 1962, and was then rebuilt and operated until 1973. In 1975, a helicopter finally moved the lookout to an entirely new location, leaving only the old concrete foundation that’s now great for a picnic. And for those who reach the summit, they’ll be rewarded with one of the most spectacular views of Mount Shasta, Mount Eddy and the Klamath range.

The path is roughly 5 miles round trip, the elevation gain is 1,827 feet, and the best time to hike the Black Butte Trail is mid-May through mid-November, depending on weather – which is always good to check before you go regardless! Hikers should be in fairly good physical condition, and you’ll definitely want proper footwear, but there’s nothing to stop you from taking a rest and enjoying the views along the way.  If you want to read about a first-hand experience of what it’s like to make the trip, read what our Everyday Adventures blogger Tammy Strobel has to say here!

Once you come down, head back into the City of Mount Shasta or Weed for some food and relaxation.  The Mount Shasta Brewing Co. in Weed has pizza and brats as well as some local craft beer (learn how to order off the secret menu here!).  You can also chill out with an invigorating and healing soak at the nearby Stewart Mineral Springs or find more restorative inspiration here.  Or, make a weekend of it, and try one of Siskiyou’s other memorable summits!  Visit here for lots of great places to stay.