“Castle Peak” lies between Castle Crags and the Trinity Divide and this is the location that has given the mountain its unofficial name at the edge of Crags as well as Castle Lake. Many people still come to see “Castle Peak” despite its name not being official. The mountain flanks where the Battle of the Castle Crags took place happened in 1855. The Battle of the Castle Crags was the last known conflict where the Native Americans depended on bows and arrows to protect themselves. The well-known poet Joaquin Miller took place in the battle and a decade later western artist Albert Bierstadt climbed the flanks of “Castle Peak” to paint a scene of Mount Shasta.

Route Type: Out & Back

Directions: From the town of Mt. Shasta, head west on W. Lake, crossing over I-5. At the stop sign, turn left onto Old Stage Road. After 0.25 miles, veer right onto WA Barr Road. Continue south, crossing over the dam that impounds the Sacramento River and forms Lake Siskiyou. Just past the dam, make a left hand turn onto Castle Lake Road which climbs for 7 miles to the roads end at Castle Lake.

Highlights: Impressive views of crags, site of the Battle of the Castle Crags 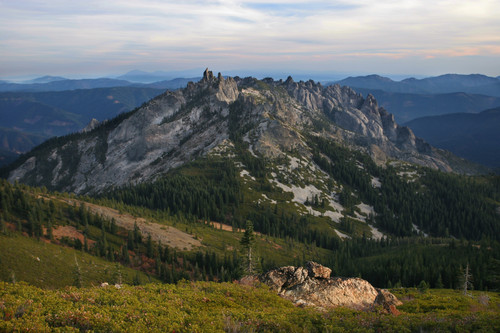