What’s in a name?  Well, when it comes to a visitor navigating “Shasta,” it can sometimes be a challenge.  Locally pronounced as “shass-tuh,” the word is said to be Native American in origin and may or may not mean “three-peaked mountain.”  It’s also said to be a generic Sanskrit word for “teacher.” But in modern parlance, and referring only to places (not people, language or a brand of soda), saying “Shasta” mostly refers to the iconic and sacred volcano that dominates just about all of Siskiyou.

But, then again, it could be referencing Siskiyou’s neighbor that’s actually about an hour south of the mountain: Shasta County. Someone might also be referring to the city of Mount Shasta, the city of Lake Shasta, or even the town of Old Shasta. Then, of course, there’s Shasta Lake, Lake Shastina, Shastina and even Shastarama, just to add to the confusion.  So how does a first-timer navigate this maze that seems collectively referred to as Shasta?  Here’s a simple primer on navigating Shasta!

The grand-dame of Siskiyou, the magnificent Mount Shasta is without a doubt the “unchallenged monarch” of Northern California.  At 14,162 feet according to the USGS, it is the second tallest in the state and visible from well over 100 miles away.  Many come to marvel at it, while others come to summit.  For the visitor looking to navigate their way around the mountain, the closest towns surrounding it are the City of Mount Shasta, McCloud, Weed & Dunsmuir.  For great places to stay and play in any of these communities, visit here. 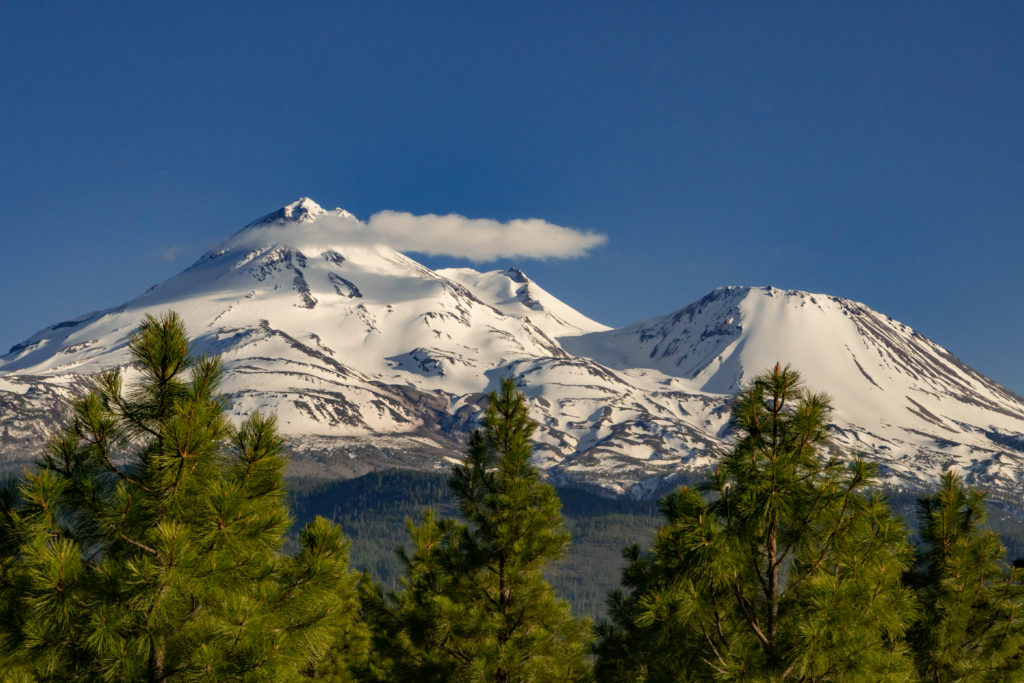 PLACES NAMED SHASTA THAT ARE CLOSEST TO THE VOLCANO
(IN SISKIYOU)

The City of Mount Shasta

Mount Shasta, as it’s sometimes referred to locally, is a city in Siskiyou that sits at about 3,600 feet above sea level on the flanks of its namesake mountain, less than 9 miles southwest of the summit.  Here you’ll find a quaint downtown, a wide range of hotels and restaurants, gear and equipment rentals to explore all aspects of the outdoors, wellness and spiritual-centered experiences and shops, and a great visitor’s center run by the Mount Shasta Chamber that can help steer you in any direction you’d like to explore.

If Shasta does, in fact, mean three-peaked mountain, there’s a reason. Depending on which way you look at the mountain, you can see all three peaks. One of those peaks is referred to as “Shastina” (meaning little Shasta).  Situated about a mile to the northwest side of Mount Shasta, Shastina is actually a satellite cone of Mount Shasta, meaning it’s not part of the volcano’s central vent.  It is also by no means “little.” The Shastina summit rises to 12,330 feet (3,758 meters), making it the third tallest peak in the Cascade Range. There are numerous wonderful trails to enjoy on Shastina, and experienced hikers sometimes use it as a training ground for attempting a summit of Mount Shasta itself. 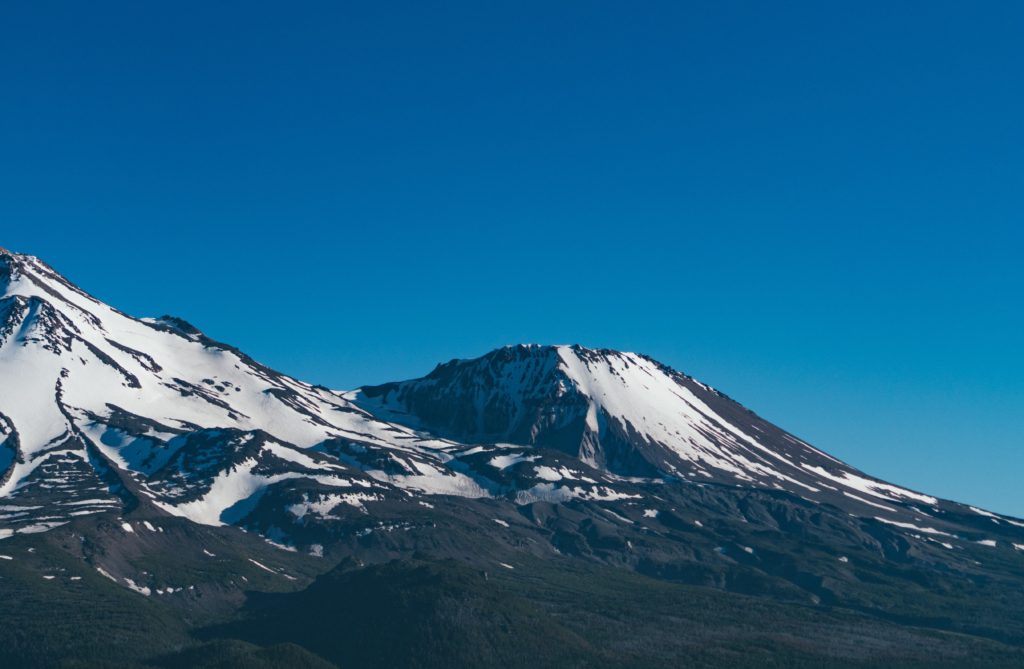 On the south side of Mount Shasta is spot called Shastarama Point.  Accessible by a vertical ascent more challenging than what you’ll find on Shastina, it sits at 11,135 feet (3,393 meters). To reach the Point, you’ll need to ascend the Old Ski Bowl trail, then veer right and follow the Sargents Ridge trail. Be sure to make a stop at the Southgate Meadows, situated along the ridge’s east side, to take in some amazing views. Please also note, there has been recent avalanche activity this past winter so it’s always good to check local conditions before you go!

The Shasta River is a tributary of the mighty Klamath River and flows northwest through the Shasta Valley past Weed, through Lake Shastina and past Montague where it then connects with the Klamath about 8 miles northeast of Yreka.

Located in the Shasta Valley near Weed and twenty minutes north of the volcano, Lake Shastina refers to a man-made lake (Dwinnell Reservoir) and the thriving community that surrounds it, blessed with some of the most commanding views of Mount Shasta because there are absolutely no geographic features obstructing it. Lake Shastina is also known for the nearby golf resort of the same name, and a great place to spend the day. 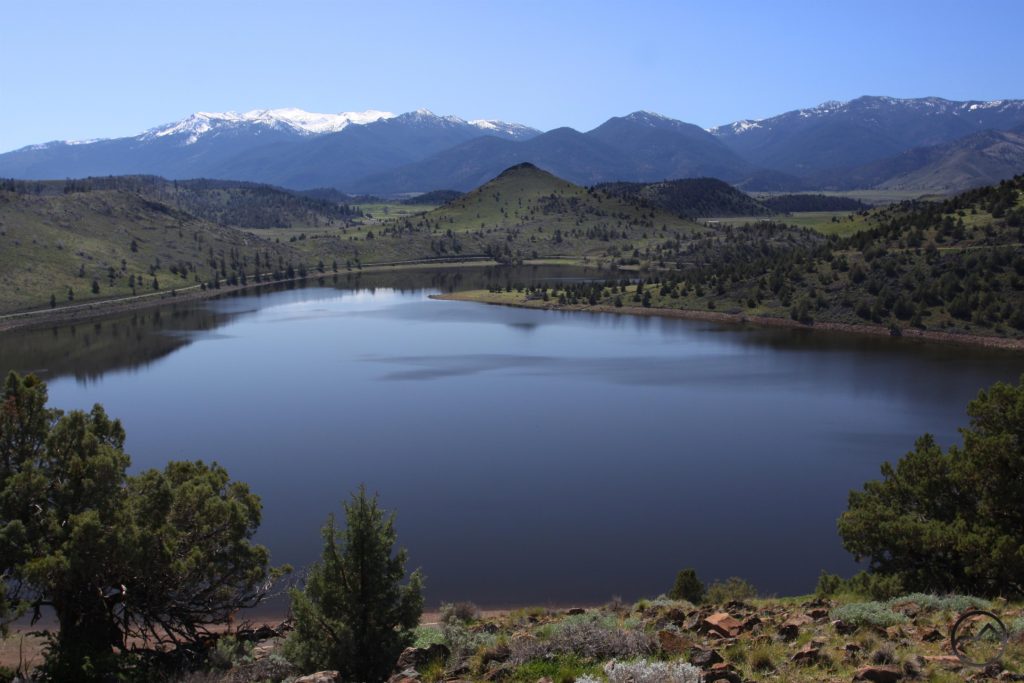 PLACES AN HOUR OR MORE FROM THE MOUNTAIN

(IN SHASTA COUNTY AND CLOSER TO THE CITY OF REDDING)

The City of Shasta Lake, once called Central Valley, is a city located about sixty minutes drive time to the south of the volcano, and is found in Shasta County. It is the closest settlement to Shasta Dam and Shasta Lake reservoir, which are popular tourist destinations.  For more information on activities and lodging in this area, visit here.

At 602 feet/183 meters, the Shasta Dam that forms Lake Shasta Reservoir is the second largest concrete dam in the country.  It is also near the city of Shasta Lake and Redding, and an hour south of the volcano. A typical summer day finds the crystal blue waters sprinkled with fishing boats, jet skis, inner tubes—almost anything that floats. Especially houseboats. Fun fact: “This Land is Your Land,” Woody Guthrie’s ode to America, was written while he helped build the dam’s arch barrier.  For more information on activities and lodging in this area, visit here.

A bustling town of the 1850s through the 1880s, Shasta was, for its time, the largest settlement in Shasta County and the surrounding area. Sometimes referred to today as “Old Shasta”, the town was an important commercial center and a major shipping point for mule trains and stagecoaches serving the mining towns and later settlements of northern California.  For more information on activities and lodging in this area, visit here. 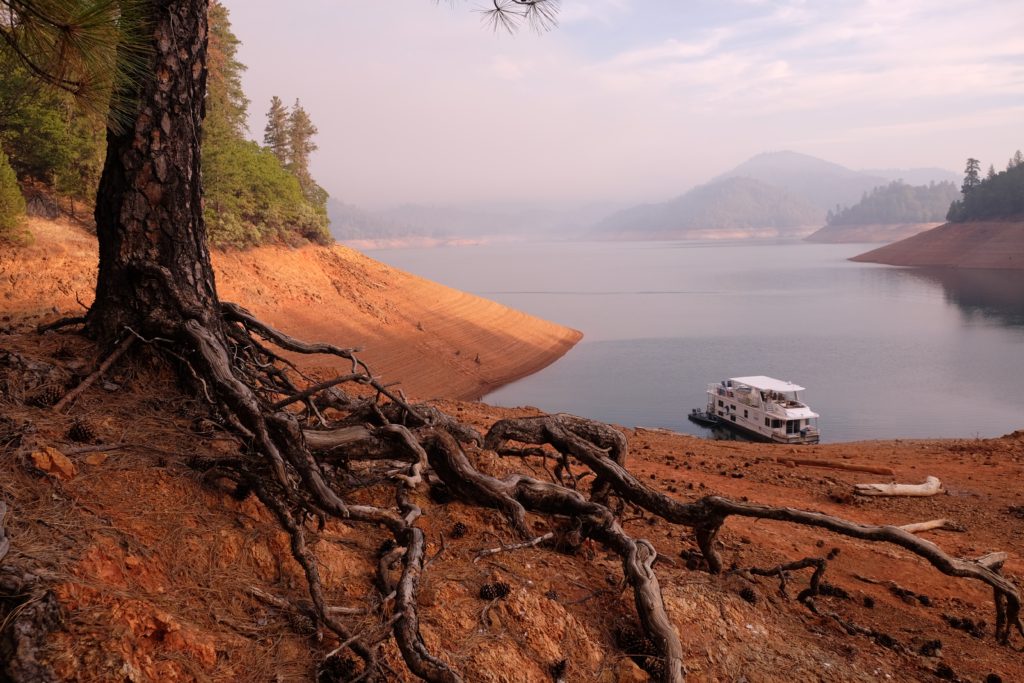